U is for Unbelievably…Shitty Leadership 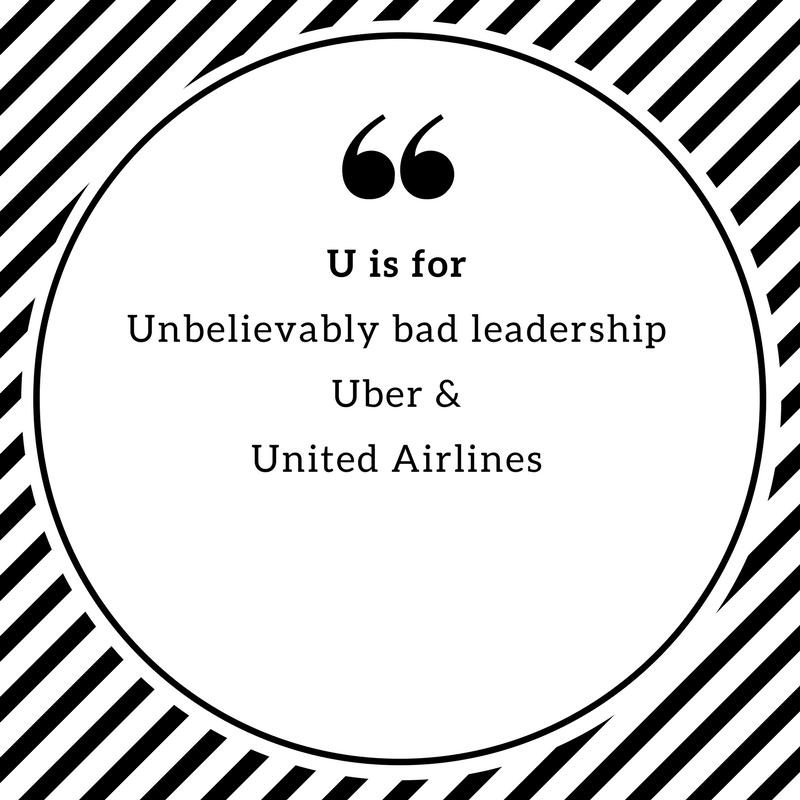 Two brands that sit right next to each other at the bottom of the alphabetical order. They’re also both in the business of transporting customers from point A to point B, and… they both have arrogant, tone-deaf, ass biter CEOs who blame others and make excuses when they really should just say “Sorry.”

I find this juxtaposition hilarious.

In my mind, I sat down with the CEOs of Uber and United Airlines to get clarification on some of the things I’ve been reading and some of the apologies they’re making. Here’s the transcript:

Let’s start with the friendly skies.

Oscar, thanks for talking with me. How are you holding up? That’s okay, you don’t’ have to answer.  I thought you might like a chance to explain your statement in the letter you wrote to employees. You know the one that said: “when crew members first approached the passenger to tell him to leave, he “raised his voice and refused to comply,” and each time they asked again “he refused and became more and more disruptive and belligerent.”

Were you really saying ‘This is the customer’s fault! If he just would have kept his voice down and complied, and not become more disruptive and belligerent, all this could have been avoided?’ because that’s how it read. Oscar, why is your eye twitching like that? Have a drink of water, and let’s keep going.

When you said “This is an upsetting event to all of us here at United. I apologize for having to re-accommodate these customers” was this supposed to evoke sympathy for all of you at United? Because usually when one violates a customer, it’s the customer who gets apologized to. But for sure, you get kudos for “re-accommodating” him. Otherwise, that could have really blown into a shit storm.

And lastly, when you said “United Airlines agents were “left with no choice” but to call security officers” were you really saying ‘we prevent agents from doing the right thing for the customer?’ I only ask because eventually you said “It’s never too late to do the right thing.”  Are you sure Oscar? Because, I’m pretty sure we have prisons full of people who thought the same thing.

Well that’s all the time we have with Oscar Munoz, CEO of United Airlines. As he makes room on the sofa for my next guest, I just want to remind folks, that ‘just because it’s legal, doesn’t make it right.’ Ok! Travis Kalanick, CEO of Uber, welcome.  If it’s okay with you, let’s jump in….

Travis, let’s start with the thing that wasn’t a thing until Susan Fowler spoke up about it.

When you referred to the culture of sexual harassment at Uber and said this was “abhorrent & against everything we believe in” and pledged that “anyone who behaves this way or thinks this is OK will be fired” did you really mean anyone?

I ask because you behaved pretty abhorrently yourself when you said to one of your drivers “You know what? Some people don’t like to take responsibility for their own shit. They blame everything in their life on everyone else.” And you still have a job, right?  #AnyoneBUTtheCEO #DashCamsAreABitch

And actually, let’s talk about what happens when abhorrent behavior gets captured on video. At least you listened when someone told you NOW is when you apologize:

“To say that I am ashamed is an extreme understatement. It’s clear this video is a reflection of me.… I must fundamentally change as a leader and grow up. This is the first time I’ve been willing to admit that I need leadership help and I intend to get it.”

Ahh, there it is!  Well, Travis, did you at least get the ‘leadership help’ you intended to get? I hope so. I can see this is making you uncomfortable, so I’ll ask my final question. I heard your PR maven, Rachel Whetstone is the most recent casualty floating in the Uber Ganges. Since the PR person is usually the one who stays long enough to turn out the lights, now who’s going to do it?